Home » #DUIdata » Is it a detention if you voluntarily give Police your ID?

Is it a detention if you voluntarily give Police your ID? 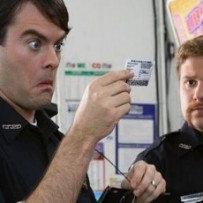 Is it a detention if you voluntarily give Police your ID?

The 4th Amendment protects against unlawful searches and seizures.  But does this protection come into play if the encounter starts as a consensual one?  Where it’s a friendly interaction with the police–one that you initially consent to?  It all revolves around whether this contact would be deemed a “detention” and this October 8, 2015 California Court of Appeals decision People v. Linn (cited as 193 Cal.Rptr.3d 342) addresses this.

The initial law regarding this:

“Consensual encounters do not trigger Fourth Amendment scrutiny.” “Unlike detentions, they require no articulable suspicion that the person has committed or is about to commit a crime.” “[T]here is “no `bright-line’ distinction between a consensual encounter and a detention….” “The test is necessarily imprecise, because it is designed to assess the coercive effect of police conduct, taken as a whole, rather than to focus on particular details of that conduct in isolation.”

“A detention occurs when an officer intentionally applies physical restraint or initiates a show of authority to which an objectively reasonable person innocent of wrongdoing would feel compelled to submit, and to which such a person in fact submits.”

This is an objective test. “In situations involving a show of authority, a person is seized `if “in view of all of the circumstances surrounding the incident, a reasonable person would have believed that he was not free to leave,”‘ or `”otherwise terminate the encounter”‘ and if the person actually submits to the show of authority.” I omitted the internal cites.  Neither “the officer’s uncommunicated state of mind nor the subjective belief of the individual citizen is relevant to the determination of whether a police contact is a detention.”

“Questions by an officer of a sufficiently accusatory nature may “be cause to view an encounter as a nonconsensual detention.” “The same is true for commands or directions issued in the course of an encounter.”

In the “ordinary course a police officer is free to ask a person for identification without implicating the Fourth Amendment.” Just as police can ask for and examine your license without it being a detention (on its face).

But here’s the catch: once police take your license that you voluntarily gave them, does that transform a consensual encounter into a detention? “[A]n officer’s taking of a voluntarily offered identification card, while it may be considered as a factor in evaluating whether a detention has occurred pursuant to a review of all the circumstances involved in an encounter, is not alone definitive in resolving that question.” So we put on our Law Supersuit and dive in.

What happened in Linn?

The facts are key here.  The Officer was on patrol in full uniform on his marked police motorcycle.  While Defendant is parked in a parking stall, her passenger flicks a cigarette out the window.  Officer stops ~3 feet from Defendant’s driver side door as Defendant and passenger were getting out.  Officer does “not turn on lights or sirens, block defendant’s pathway, display his weapon, or comment about whether the two were free to leave.” But as Defendant exits, Officer stands even closer to Defendant “as she emerged from her car.”

Officer tells Defendant he’s contacting her because of the ashes out the window, and commands Defendant “to put out her cigarette and put down her soda can, thereby indicating that she was not free to do as she pleased.”  Officer asks for Defendant’s license, she gives it voluntarily, and Officer runs a record check “without further explanation.”

Officer then “began to question her passenger and write down his answers in a manner that suggested further police investigation.”

Then Officer smells alcohol on Defendant, and this turns into a DUI arrest and charges.

All 3 Appellate Judges deemed this to be a detention, and unlawful at that.

Although Officer did not block Defendant’s path, sound any sirens or shine any lights, his physical closeness to her as she stood between him and her vehicle, and his pointed statement about the conduct of the passenger of a car Defendant had just completed driving, followed by his immediate request for her identification, “would have placed an objectively reasonable person on alert that Officer might be investigating her specifically for a possible violation of the law and, therefore, created doubt as to whether she was free to leave.” And Officers statement to Defendant “implicated her responsibility as driver and could be understood as an accusation that she had violated the law.”

Plus, “added to such suspicions of an objectively reasonable person by immediately following this statement with a request for defendant’s driver’s license, taking the license and holding it as he initiated a record check of defendant, all without further explanation. Defendant had just parked her Expedition.”

“It is reasonable to presume that she would need her driver’s license to drive, as well as for other purposes. This suggests [Officer’s] decision to hold her driver’s license had at least some coercive effect, as defendant’s walking away without it would have limited her ability to function.”

Plus, the “directing defendant to put out her cigarette and put down her soda can” “would heighten an objectively reasonable person’s suspicion that she was under police investigation and not free to leave.”

Eric Ganci is an owner and DUI lawyer in San Diego with Ganci, Esq., APC.  He is trained in blood testing for drugs and alcohol, trained on breath testing, and trained to train police on field sobriety tests.  He has authored Thomson West Publications regarding DUI science and law, and is a founding member of the DUI Lawyers Association, a national group.

As of 2014, Eric is recognized, after completing the required coursework and passing the certification exam, as a Lawyer-Scientist by the American Chemical Society, Chemistry and the Law division.

He received his JD from Thomas Jefferson School of Law, his BA in Music Education from Northern Illinois University, and graduated from the Trial Lawyers College in 2013.

On the side, I am an active musician with his San Diego live band karaoke group, Rock Out Karaoke, and has earned several musical accomplishments, such as opening for Anthrax and having Ving Rhames say “I like your band’s cd.”