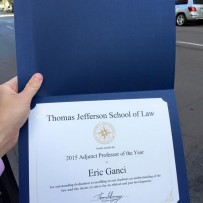 TJSL awards Eric “Adjunct Professor of the Year”
I’ve been fortunate to win a handful of awards for wearing the ‘ol suit and tie.  But this one means so much more. This was for the Trial Practice team at Thomas Jefferson that Renee Galente and I co-taught last semester.
It’s a solid program, well-led, and surrounded by other talented coaches (we were all awarded this for last semester). Our trial team was amazing, and the students really jumped in and soaked up the trial methods we taught.  It was a load of work with my own trial schedule, but such a great way to give back to the legal community.  I’m beyond humbled to get this award. 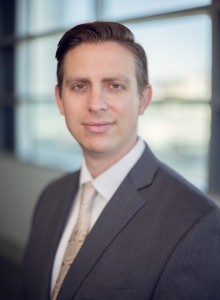