Home » #DUIdata » Can a Judge interact with jury deliberations?

Can a Judge interact with jury deliberations?

Posted by Eric Ganci on November 1, 2016 in #DUIdata, Uncategorized | 0 comments 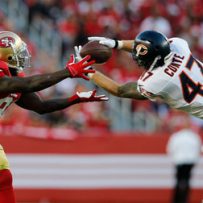 How much can a Judge interact with Jurors while they deliberate?  If the Jurors have questions or cannot reach a verdict, can the Judge answer questions?  If so, to what extent?  This August 15, 2016 Cal Supreme Court decision People v. Nelson gives some guidance (and why I used the picture of Conte intercepting a pass).

The facts of Nelson:

While this can happen in any San Diego DUI or criminal trial, Nelson  is a murder case where the Jurors appeared deadlocked and hung (they could not make a decision for either a verdict of guilty or not guilty).

Over Defendant’s objection, the Court gave the Jurors a questionnaire the DA prepared with the following questions:

“The court decided to question each juror individually in camera to determine whether any of the comments in the questionnaires “have any foundation in fact to the point at least to where it would show good cause to excuse a juror.” Defense counsel objected to the proposed procedure.”

What’s the law say about this:

First, the general rule: Although the Court can inquire to check for juror misconduct, in general, “[t]he mental processes of deliberating jurors are protected, because `[j]urors may be particularly reluctant to express themselves freely in the jury room if their mental processes are subject to immediate judicial scrutiny. The very act of questioning deliberating jurors about the content of their deliberations could affect those deliberations. The danger is increased if the attorneys for the parties are permitted to question individual jurors in the midst of deliberations.” Original emphasis kept.

“[N]o one — including the judge presiding at a trial — has a `right to know’ how a jury, or any individual juror, has deliberated or how a decision was reached by a jury or juror.”

If the Jurors indicate they have reached an impasse, then “the trial judge may, in the presence of counsel, advise the jury of its duty to decide the case based on the evidence while keeping an open mind and talking about the evidence with each other.” So that’s super general…

So was what the Nelson Court did proper?

Ah, no. “In this case, the trial court went considerably beyond any permissible intervention and took action that undermined the sanctity of jury deliberations and invaded the jurors’ mental processes. Based solely on the reported impasse, the court subjected the jurors to a detailed questionnaire that asked them to report on the thoughts and conduct of their fellow jurors — specifically, whether the jurors were refusing to deliberate, whether they were basing their position on anything other than the evidence and jury instructions, and whether they were expressing views about the inappropriateness of the death penalty or life without parole based on anything other than evidence and law.”

Here, while “not every unwarranted intrusion into a jury’s deliberative process requires automatic reversal[,]” the Court here found it was not harmless.