Can police search my car after a DUI arrest? People v. Wallace 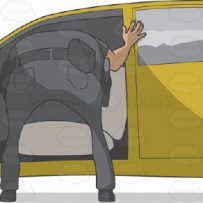 I get this question a good deal, whether Police can search your car after a DUI arrest. This 9/7/17 case People v. Wallace gives some thoughts. It’s from the California Court of Appeal, 1st Appellate Dist., 2nd Div.

There are laws as to whether police can search certain areas or containers in your car, and this case case doesn’t deal with that issue. Here, the officer sees the handle of a baton sticking out from a seat. At any rate, the issue is whether a car search not within police policy violates 4th Amendment. Spoiler: it violates the Constitution.

So, one officer pulls Defendant over for false tabs, and another officer (the Searching Officer) comes to the scene to assist. Both officers get Defendant out of his car and arrest him (Police also knew Defendant was wanted for a domestic violence incident from a night or two before). No real problem there. But…then Searching Officer searches Defendant’s car, as their Department have  a policy that requires officers to have a vehicle towed and inventoried when no one was present to take custody of it (which no one was). The officer finds a baton, and Defendant is ultimately convicted of possession of a baton.

Now, “Courts have recognized an exception to the warrant requirement when the police take ‘an inventory of the contents of a vehicle’ in the course of impounding it,” but that’s different than what happened here. And the law is the Police can’t use the inventory as a “pretext for searching a vehicle for contraband or other evidence.”

Here, Searching Officer testified it’s CHP policy “to have a vehicle such as defendant’s towed and inventoried when no one was present to take custody of it, it was standard procedure to fill out a CHP 180” to list items inventoried.

However, there were problems with Searching Officer: “He did not testify that either he or Sergeant Reeves, or the two of them jointly, had decided to have defendant’s vehicle towed before he searched it. He did not testify that either of them arranged to tow the vehicle. And he testified that he did not know whether the vehicle was in fact towed or whether a CHP 180 form was ever prepared. He admitted he did not fill out a CHP 180 form, and no such form was offered in evidence by the prosecution, suggesting that no policy-compliant inventory search was ever completed.” Also, Searching Officer testified ‘[t]he vehicle had nothing to do with why I was there’ and that he had ‘nothing to do with this traffic stop or anything to do with the CHP-180 [form], if there was one filled out.’”

The Court holds this was a search and violated the 4th Amendment. The People did “not defend the search as a valid inventory search or otherwise contend it was constitutionally permissible” but argued Police would have found the baton eventually (the baton had a red handle sticking up between the center console and the driver’s seat). So they argued inevitable discovery, and the Court didn’t buy that either.