Can you get a DUI on a bicycle? 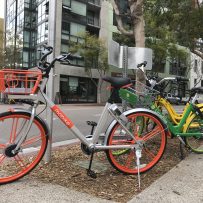 I recently posted about whether you could be arrested, charged, or convicted for a DUI on an electric or motorized scooter. San Diego has recently blown up with these things.

At the end of that blog, I also talked how the same DUI fate could happen to you for being impaired while riding a bicycle. Yes, and bicycle. San Diego has also been seeing loads more bicycles from docked dockless shared bicycles.

Some would think that riding a bicycle would be way smarter and safer than driving a car while impaired…but wouldn’t you know that California has also made bicycling while under the influence a crime.

Now, there is no legal per se limit for this. So like how what many think of as a DUI while driving a car…and how that legal limit (usually) is a .08 BAC…there is no per se legal limit for drunk bicycling.

We also don’t have a legal limiting for doing your paper route via pedal power while high. But, if you’re contact by police for impaired bicycling, Vehicle Code Section 21200.5 says you can request a chemical test, and the Officer has to give it to you. Whether you WANT to request that is a different story…because it may create more evidence against you, but you have that option should you want to exercise your right. This certainty is not advice either way on that, as there may be drawbacks or benefits to taking either route.

Well, drunk bicycling is just a ticket or infraction, right? HA! You, Good Sir, need to take your laws more seriously. Riding a bicycle while impaired is a misdemeanor thanks to California Vehicle Code 40000.13.

Also, if you are convicted of one of these bad(ish) boys with a date of arrest when you were under 21, you lose your license for one year (per California Vehicle Code 13202.5).

Be safe out there.

Oh, one more thing: this is California law, which may or may not be different than your jurisdiction if you’re not one of the Best from the West.