Home » #DUIdata » Can the Prosecution comment on you not calling an alibi witness?

Can the Prosecution comment on you not calling an alibi witness? 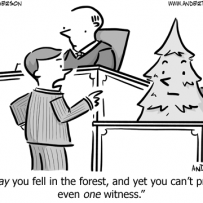 Let’s say you on trial for murder. The defense argument is the People cannot prove you actually did it, and that maybe you had an alibi. But…assume Defense does not call any witnesses for this alibi “Defendant was somewhere else” defense.

With that, can the Prosecutor comment that Defense didn’t call any alibi witnesses?

Well, we know any Defendant has a right to remain silent. And it’s improper if the Prosecution comments in trial about Defendant not testifying (it’s called Griffin Error, per the Griffin case). So your gut reaction may be “commenting on no alibi witness sounds close to Griffin Error.”

You would also get points for trying. Per this April 17, 2018 decision People v. McDaniels, it’s ok for the People to make this comment in closing argument.

This is what the Prosecutor argued in closing:

“Put yourself in the position of being a defendant. You can bet your boots that if you had anything to offer by way of evidence, by way of alibi, that you would offer it. Be assured of that. Be assured of the fact that any defense attorney would make sure that if any such evidence existed you would have it. You don’t have it.”

So, the Prosecutor wins this legal argument. Although 1) there’s a Golden Rule argument, because you cannot tell Jurors to put themselves into someone’s position…and 2) the Prosecutor loses Cool Points for saying you can “bet your boots…”