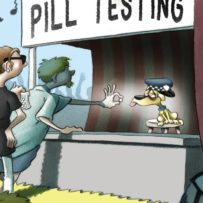 In 2016, the Cal Supremes gave us Sanchez (63 Cal.4th 665). The rule in Sanchez is that experts cannot opine on a single, fact-specific hearsay (out of court statement) when testifying.

Well, you know we can’t just leave it at that. So we’ve had appeals on that ruling. And the Court of Appeals are batting around the drug website Ident-A-Drug.

Specifically, in 2017 the Court of Appeals of California, First District, Division Five gave us People v. Mooring (15 Cal. App. 5th 928), which I got blawgy with here.

Moorings held expert testimony about Ident-A-Drug (again, which hearsay) is admissible with the exception to hearsay per Evidence Code 1340 about compilations. In Mooring, basically the People’s expert opined drugs were certain drugs from Ident-A-Drug without actually testing the drugs through confirmation chemical analysis testing.

And now to use terms of science, we have a confirmation testing of sorts by another case confirming Mooring’s rule. From the May 14, 2018 decision People v. Espinoza (23 Cal.App.5th 317), the rule is an expert is allowed to testify on an opinion when using Ident-A-Drug. Again, the facts are super similar here: “a criminalist at the Ventura County Sheriff’s forensic services bureau, examined the pills and used Ident-A-Drug, an Internet drug reference work, to identify the pills. Based on the shape, color, and pill markings, Davidson opined that the pills were methadone and clonazepam.” Also like Mooring, here there was no actual testing on what the actual pills were outside of just looking at them.

So Espinoza again splits the hairs about an expert giving an opinion based on hearsay…versus an expert giving an opinion based on hearsay while also stating what the source of that opinion is. Espinoza states: “The Sanchez court stated: “[An] expert may still rely on hearsay in forming an opinion, and may tell the jury in general terms that he did so…. There is a distinction to be made between allowing an expert to describe the type or source of the matter relied upon as opposed to presenting, as fact, case-specific hearsay that does not otherwise fall under a statutory exception. What an expert cannot do is relate as true case-specific facts asserted in hearsay statements, unless they are independently proven by competent evidence or are covered by a hearsay exception.” So, noted.

Does it sound fair that an analyst can opine something is an illegal drug without actually testing it? Well, California law need not take concern about that, as “[t]here is no ‘black letter’ rule requiring a chemical analysis of pills to prove that they are restricted prescription drugs. And the Court says “[o]n retrial, a chemical analysis in all likelihood would be performed by the sheriff’s crime lab. Perhaps the pills could be sent to the FBI laboratory at Quantico, Virginia, for an analysis.” In all likelihood and perhaps..

Now, more facts of Espinoza are not helping Defendant…as during a search of Defendant Police found the canister “near appellant’s rectum.” And then he tried to swallow them…and when that didn’t work, he tried to fight the cops and kick the pills everywhere. So I’m not saying these were awesome facts to be dealing with. But I am still wishing proper science would have been conducted.

The Court leaves with the stinger that “[a] defendant is entitled to a fair trial, not a perfect one. Here he had a fair trial.”