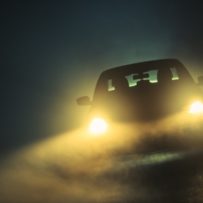 What if the police shine a spotlight at you? Nope, not a detention quite yet probably: “Without more, a law enforcement officer shining a spotlight on a person does not constitute a detention.” Citing People v. Rico (1979) 97 Cal.App.3d 124, 128–130.

Well, here in Kidd “the officer pulled in behind Kidd’s car and spotlighted it without any observation of possible wrongdoing, but rather just to check to see what the car’s occupants were doing, and to check if they lived in the neighborhood.” “The officer passed the car, made a U-turn, and parked about 10 feet behind the car, which had another car parked about 10 feet in front of it.” “The officer did not block Kidd’s car in, and he did not illuminate his colored emergency lights[.]” The officer pointed two spotlights—one by his driver’s side mirror, the other on the overhead light bar—at the occupied car….”

At this point, the Court doesn’t seem to think this is a detention yet. However, “any ambiguity [to whether this was a detention] was removed when the officer more or less immediately exited his patrol vehicle and began to approach Kidd’s car. Although the officer’s approach was, according to record, not made in a particularly aggressive or intimidating manner, a reasonable person in Kidd’s circumstances would not have felt free to leave.

The Court here found this to be a detention that “was not legally justified.” So the evidence found after the first contact was deemed unlawful and suppressed.

There was another ruling here too: Defendant had run two 1538 motions to suppress and lost both with two different Judges. But then he ran a Penal Code 995 motion to set aside information and another Judge granted that motion. The People argued Defendant’s “motion was an inappropriate request to relitigate a matter that had previously been considered and decided by a different superior court judge, and that it should have been denied on that basis.” But the Court rejects that argument and says Defendant properly used this 995 motion.