Below is what I’ve been tracking, listening to, and reading this month. I have an email capture at the bottom of this blog if you want me to email you once a month when I post these blogs.

New shows are in bold.
2/1/21, Gerald Clayton and Gilbert Castellanos. Streaming through the La Jolla Anthenaeum site. Tix here.
2/26/21, San Diego Symphony. They’re doing: TCHAIKOVSKY: Serenade for Strings in C Major, Op. 48; MOZART: Serenade No. 12 for Winds in C minor, K. 388; and CARLOS SIMON: Elegy: A Cry from the Grave. The SD Symphony is streaming concerts for our 2021 season on the last Friday of each month. Tix here.
9/1/21: Lamb of God; Trivium; Megadeth at FivePoints Amphitheater in Irvine. I’m new to Trivium. The (apparently new) drummer Alex Bent is a monster. I’d love to see him drum alongside Lamb of God’s Chris Adler.

Beat Odyssey 2020, from Steve Jordan (drums) and Mix Master Mike (tables). Jordan on this is solid, big, and hungry. Also, my teacher side says this is a great album for drum students to transcribe beats. It’s also neat to hear all the different tones they captured and produced through this album (FYI, for more fun with recording stuffs, check out my buddy Luke’s blog). Jordan and MMM recorded this without a click and all improvised per Jordan’s interview in Modern Drummer, January 2021.
Ed Kornhauser’s Transient Ruminations. First, Ed is local San Diego. We’re fortunate to have him, as he’s well-researched and -read. He used to run a podcast called San Diego Sessions about the San Diego jazz scene and it was wonderful. Well, he just released an entirely improvised solo piano record. Ed says “I made no plans or sketches. [I] [j]ust went for it, shifting and playing with moods, ideas, and textures as I went. Single take. Warts and all. Also, the “[c]over art is a painting by Ayari Gstarrific (done whilst listening to the record) with some collage work by Anastasya Korol. Engineering expertly done by James Page.”
Ok, this album needs to be listened to cover-to-cover. I put it on…and then pushed the computer away. To give myself the ability to sit and listen what he develops. It’s amazing and a freeing way to listen to a full album to not just hear it one song at a time, but instead as a whole symphony.
Bootsy Collins’ The Power of the One. This album is one big party as we’d expect. There’s some fun collabs with Snoop, Kingfish, and jazz and fusion heavies Christian McBride, Victor Wooten, and Branford Marsalis. Bootsy also was on Mark Maron’s WTF podcast, which was neat since Maron also interviewed bassist monster Thundercat within a few weeks too. They also talked a good amount of anime in Thundercat’s episode. The whole album is funky goodness. But I recommend starting with “Bootsy Off Broadway” because we all need to hear Christian McBride walk a killer bass line underneath a Bernard Purdie’s backbeat. It also has Branford Marsalis on sax.
Django Bates released Tenancity, which is not on Spotify as of when I write this. But his 2017 release Saluting Sgt. Pepper is, so it gave me reason to go back and listen to it again. He does such a good job keeping the original imagination and flavor of the original, which voicing it with his own band. Lots of wonderful tone painting going on here and the album is a lot of fun.
I recently read The Miles Davis Reader which is published by Downbeat magazine and showcases all the interviews, features, and reviews of Miles over the years. The book is incredible and it got me excited to create a playlist to track Miles’ progression through his career, as he’s one of the most progressive musicians I know.
So I’m going back through the reviews, stopping to listen to the albums, and making a chronological playlist here (of the albums on Spotify). And here are some songs I really enjoyed along the way:
“Nature Boy” from the 1955 Blue Moods. Miles, Charlie Mingus, Teddy Charles (vibes), Britt Woodman (trombone), and Elvin. The song is haunting, like fog settled on a overcast morning. Mingus arranged this tune.
“Bye, Bye, Blackbird” from ‘Round about Midnight. To quote Ralph Gleason in is Downbeat review of this album “[t]here is a mellowness, a lack of hostility and a ripe, romantic grooviness to the sound and spirit of this album that makes it an utter pleasure to hear.” Blackbird to me on this album is the epitome of that romantic groove. I love hearing Miles develop his ideas through is solo. He’s not trying. He’s just having a casual conversation through his horn. He’s not trying to use big words. He’s just having a somber conversation, like at the end of a long day. It’s so relatable.

I want to continue to educate myself in history, especially as it relates to African Americans. And especially given the deaths of so many African Americans over the last years. And to think, those are what we’re just learning now that we have so much more information with cell phone cameras, social media, etc. I feel I didn’t get a true understanding of history in my formal education so I’m learning more.  A few months back, I listened to The Autobiography of Marin Luther King, Jr. It was powerful and the book included excerpts of Dr. King delivering speeches, which brought tears to me eyes.

But I also wanted a prospective different than Dr. Kings. So I listened to The Autobiography of Malcolm X, performed by Laurence Fishburne. That also led me to listen to Jody Armour’s 2020 book. Armour is law professor at University of California a lawyer, where he specializes in race issues in legal decision-making. He’s also the son of Fred Armour from the US Supreme Court case Armour v. Salisbury. I have so much more to learn about our history and culture but the more I learn, the more I can understand the awful past of segregation and continue towards true humanity within equality.

It’s been a very important month of learning for me.

On a note of gratitude: Michael J. Fox’s No Time Like the Future: An Optimist Considers Mortality, ready by Michael J. Fox. I fell in love with Fox again when he was on Scrubs, one of my favorite shows. His book, while very raw about life with Parkinson’s, holds lots of joy and compassion for living this life.

Finally, on a lighter note, I also listened to Ready Player Two by Ernest Cline, narrated by Wil Wheaton. This and Ready Player One read much like a Dan Brown book: an overarching story with lots of factoids. Both Player One and Two are chocked full of fun 80’s music, video game, and movie stuffs. Quite enjoyed both of them.

Ok, I can’t end without showing a great scene with Fox on Scrubs. 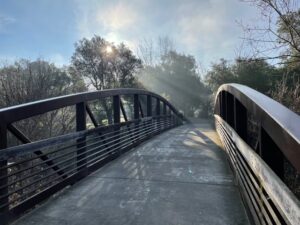 This is a bridge I’d cross on my morning runs along the Santa Rosa Creek in January. It was really pretty when the sun would cut through the morning fog like this.

Eric Ganci, Esq.
By day, I'm a civil trial lawyer, with a focus on brain injury cases, with CaseyGerry. I've done 70+ trials to verdict and I'm honored to teach trial skills to lawyers across the nation with the Trial Lawyers College. When not lawyering I'm a musician, drumming with the San Diego live-band karaoke group Rock Out Karaoke. I earned my JD from Thomas Jefferson School of Law and my BA in Music Education from Northern Illinois University.