Below is what I’ve been tracking, listening to, and reading this month. I have an email capture at the bottom if you want me to email you once a month when I post these.

New shows are in bold. Some artists are rebooking shows cancelled from COVID, like the Collier show below now set for 2022.
4/12/21: Eric Reed and John Clayton live-stream through the La Jolla Athenaeum. Tix here.
6/3/21: They Might Be Giants at Humphrey’s by the Bay. Tix here.
9/1/21: Lamb of God; Trivium; Megadeth at FivePoints Amphitheater in Irvine.
9/16/21: Michael Franti and Spearhead at Humphrey’s by the Bay. Tix here.
4/16/22: Jacob Collier at San Diego House of Blues. More info here.

The score for The Queen’s Gambit. I listened to this book, as I discuss below. I have not seen the Netflix series but I’m enjoying it more that way. As I listen to the score, I  picture the scenes over the various cues and “Training with Mr. Schaibel” is by far my favorite. In the book, Mr. Schaibel supports Beth and encourages her chess and the music cue is curious and longing…yet loving. I love how Rivera weaves a silky ribbon of the cello and ultimately leaves this cue playful at the end. It’s wonderful painting through music.

Grammy-time! I love checking out the Grammy nominees and winners each year. I’m currently enjoying:

Best Contemporary Instrumental Album: Snarky Puppy’s Live at the Royal Albert Hall. Oh my. Oh my-oh my. I honestly don’t think I can express enough how much I love SP. As I write this, I’m just getting into this album. But you see, I have a problem because I can’t get past “Alma”…it’s so delicious and I keep repeating it. Check out 7:58 through the end of the tune to see how locked in the band and how they metrically modulate to the finish.

Best New Age Album: Jim West is the guitarist with Weird Al Yankovic. It’s neat how he has the schtick gig with Al, but still produces other projects too. More Guitar Stories took the Best New Age album and it’s a really pretty collection of music.

Along this same music style, San Diego keyboardist (and organist with the Padres) Bobby Cressy has been recording under the name “Dumosa”. Here’s a taste from his recent release: it’s chill and thoughtful.

Me and White Supremacy: Combat Racism, Change the World, and Become a Good Ancestor by Layla F. Saad, read by the author. Saad born this book out of a daily challenge on Instagram: how to understand your racist foundations and upbringings, and how to step through them to become a advocate against racism. This book impacted me on many levels, as Saad gives step-by-step approaches to persons with White Privilege and also dealing with the stance of “I don’t see color” or “I don’t have a racist bone in my body.” I listened to this book but I’m also going to buy a copy so I can re-read it, highlight portions, and accept and put into action her approaches.

Stamped from the Beginning the Definitive History of Racist Ideas in America, by Ibram X. Kendi, read by Christopher Dontrell Piper. This is a great read alongside Isabel Wilkerson’s Caste, which I blogged about in my March Musics. I cannot thank Kendi enough for compiling this history, as most of the book is straight facts: facts we don’t teach in most our American school systems. It’s unreal to understand how deep and for how long racism has been in our Lands. How constructed it has been. And how demeaning it was and continues to be. He makes powerful point after point as he discusses not only politics, laws and real estate segregation that has kept racism very-much alive…but also media and how the tones (both over- and under-tones) are wildly racist. And not just with the glaring racist movies like Gone with the Wind, but also with movies like Rocky, Planet of the Apes, King Kong and so many other movies that portray “light” skins as good and “darker” skins as evil and/or lesser. I learned a lot from this book and still have so much to learn. I cannot thank these authors enough for providing this education so I can try to be part of the solution.

So You Want to Talk about Race by Ijeoma Oluo, read by Bahni Turpin. I will keep saying the same things: I have much to learn about racism and I am thankful for those who write these books. Turpin teaches us in the present–in real time–how to deal with race and respect now. The book is written from her lifetime of dealing with racism, segregation, and exclusion.

Between the World and Me by Ta-Nehisi Coates, read by the author. It’s a beautiful and powerful story of Coates talking to his son about Coates’ own upbringing, struggles, and views and interactions with the world. Coates’ prose is amazing: I could listen to him talk and read his writing all day. This is also neat about Coates: he wrote some story lines within Black Panther and Captain America, and he’s working with J.J. Abrams on a Superman reboot.

The Oxygen Advantage by Patrick McKeown, read by Alan Smyth. I feel like this book will change many things for me. As a yogi certified to teach, I appreciate how McKeown explains the science behind intaking large amounts of breath/oxygen versus taking less oxygen in and focusing more on exhalation. He lays out exercises and I look forward to diving into those.

The Queen’s Gambit by Walter Trevis, performed by Amy Landon. This made me appreciate my friends who are big into chess. There are so many methods and patterns to memorize. And so many books written about chess games to analyze, that it blows my mind. I also enjoyed how much the characters found art and practice outside the direct aspect of physically practicing chess. For my drumming, the more I learn about art across many realms, the more it shapes my approach to playing drums, creating music, and supporting a band.

The Untethered Soul by Michael Singer, performed by Peter Berkrot. I enjoyed the focus on being present with this book, as it discussed a lot with allowing experiences (good or bad) to pass through you which has been an important learning and living method for me. With this, I don’t get destroyed (well…as easily) by something I view as negative. It’s similar to Echhart Tolle’s The Power of Now. I also think a great companion book to both of these is James Clear’s Atomic Habits, which deals with the procedure of building the habits and reactions you want.

Later by Stephen King, performed by Seth Numrich. The story unfolded in a nice King-Horror type way and had characters that leaned forward as the tale unfolded. King ended with a interesting and drastic plot point. 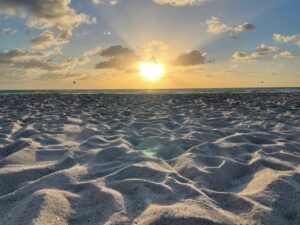 Eric Ganci, Esq.
By day, I'm a civil trial lawyer, with a focus on brain injury cases, with CaseyGerry. I've done 70+ trials to verdict and I'm honored to teach trial skills to lawyers across the nation with the Trial Lawyers College. When not lawyering I'm a musician, drumming with the San Diego live-band karaoke group Rock Out Karaoke. I earned my JD from Thomas Jefferson School of Law and my BA in Music Education from Northern Illinois University.